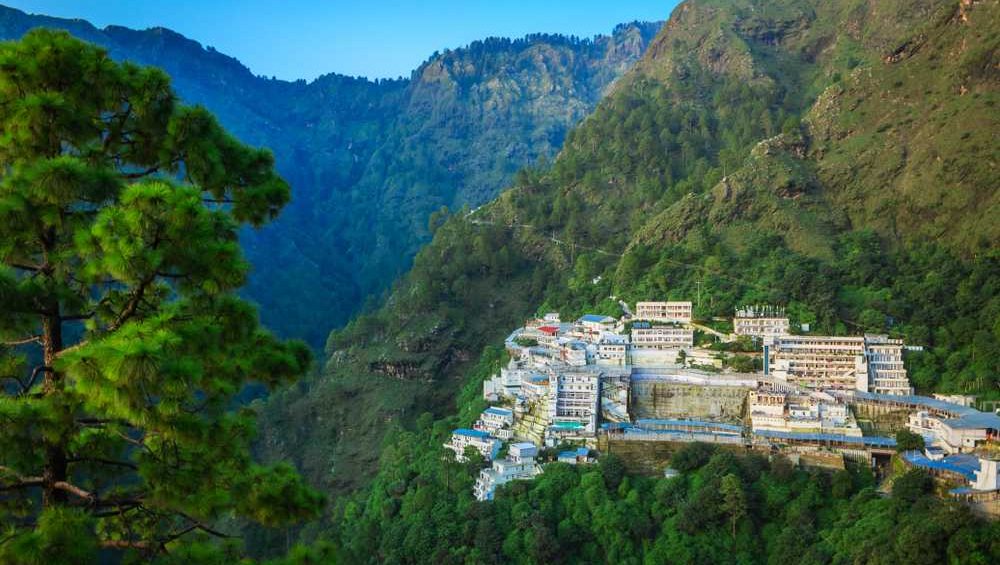 Since prehistoric times, the Kashmir region has developed into a significant hub for Hinduism. Beginning throughout the rule of numerous Hindu Kings up until the 13th century, the construction of stunning temples devoted to various Hindu deities was begun. Lord Shiva is the subject of the majority of these historic temples.

Shaivism has grown to be one of the most popular and practised sects in Kashmir since the ninth century. Shaivism eventually declined in Kashmir as a result of the invasion and rule of Islamic emperors there from the 13th to the 15th centuries.

The temples of Jammu and Kashmir are renowned for being beautiful, serene places of worship as well as significant religious and well-known landmarks. These ancient temples of worship are a must-see for devotees and for anybody with an interest in history or architecture. They are elaborately designed and meticulously maintained. Here are some of Jammu and Kashmir’s most well-known temples.

One of the holiest pilgrimage sites in India is the Vaishno Devi temple in Jammu and Kashmir. The temple, which is housed inside a cave, is dedicated to Vaishnodevi. After Tirumala Venkateswara Temple, the temple receives about 8 million pilgrims annually, making it India’s second-most popular holy site.

The shrine is 48 kilometres from Jammu city and is situated at a height of 5300 feet above sea level on hills of the Trikuta mountain range. In a stone building, a statue of the main idol, which features the goddesses Saraswathi, Kali, and Lakshmi, was found. The original, protective, and mischievous characteristics of the Mother are expressed by these three shapes. One can see nature’s beauty at its best while climbing the mountain to the temple.

Approximately 29, kilometres from Pahalgam and at a height of 3,888 metres, the sacred Amarnath Temple is a place of pilgrimage. The Shiva Lingam is regarded as the world’s ideal representation of Hinduism. With the Amarnath Yatra, a renowned pilgrimage that departs from Chandanwari, devotees visit it in great numbers. It is thought to be one of Hinduism’s 18 Maha Shakti Peethas. The Amarnath Temple’s surroundings are breathtaking, and visitors can ask for blessings there as well.

On the Shankaracharya hill in Srinagar, 1100 feet above the ground level of the main city, is where you’ll find the Shankaracharya Temple. According to the Kalhana literature, Raja Gopadatya constructed the temple in 371 BCE; at the time, it was known as Gopadri.

When the great saint Adiguru Shankaracharya came to Kashmir in the early eighth century to restore Sanatan Dharma, he remained here. Perhaps as a result, the shrine was renamed Shankaracharya Temple. The worship of Lord Shiva gained popularity in Jammu and Kashmir thanks in large part to Shankaracharya.

It is Kashmir’s oldest shrine and is devoted to Lord Shiva. The accessibility has improved significantly after Maharaja Gulab Singh of Dogra built stairs leading up to the temple.
The temple is not only a significant Hindu religious site, but it also has significant archaeological value. The temple provides a stunning 360-degree panorama of Srinagar. By regularly scheduled buses from Srinagar, the temple is easily reachable from the city. One may choose to use a cab, which are widely available around the city, to ensure a comfortable travel.

Lalitaditya Muktapida, the third king of the Karkota Dynasty, constructed the Martand (Sun God) Temple in the eighth century CE. It was allegedly constructed between 725-756 CE and was intended to honour the Sun God (the chief solar deity in Hinduism). The temple’s foundation is thought to have existed between 370 and 500 CE, and some historians credit Ranaditya with starting the building process.

In the first year of the 15th century, the temple was demolished at the Muslim king Sikandar Butshikan’s command. The temple, which is now in ruins, is five miles outside of Anantnag in the Indian state of Jammu and Kashmir.

There are seven raised “shikharas” in the vast Raghunath temple, one for each of the shrines. A portrait of Maharana Ranbir Singh and a statue of Lord Hanuman decorate the area right at the temple’s entrance. Lord Ram, a strong divinity, is honoured at the inner shrine. The additional temples include various manifestations of Lord Vishnu in addition to the main shrine. Another noteworthy shrine to Lord Surya is located there, and it contains several of the Lord’s incarnations. Other shrines within the temple contain enormous statues of Hindu gods and goddesses. It is significant to note that the inside walls of the temple’s three aspects are covered in yellow sheets.

Additionally, it includes a museum with a large collection of “lingams” and “calligrams.” Amazing temple architecture can be seen in practically all of the images of the Hindu Pantheon.

Sudh Mahadev is a highly revered temple in the Jammu area that is thought to have been constructed more than a thousand years ago. This important landmark at Patnitop is situated in Chanhani City and is frequented all year long by a sizable number of Shiva worshipers.

A holy river named Pap Nashni Bowli is located close to the temple, and anyone who bathes in it has the honour of having their sins washed away. Visitors to Sudh Mahadev in large numbers during the Asad Purnima Festival. This three-day event, which takes place in June, is one of Patnitop’s top attractions.

Bahu Fort is 5 km from the city’s centre and is perched on a rock face on the Tawi River’s left bank. It was most likely erected by Raja Bahulochan more over 3,000 years ago, making it the city’s oldest stronghold and construction. The Dogra monarchs recently expanded the existing fort by expanding it further. There is a temple inside honouring the Hindu goddess Kali. Around the fort has been extended Bagh-e-Bahu, a sizable terraced field.

A small garden surrounded by vast amounts of woods offers travellers a populated location. The historical goddess of the Dogras, Mahamaya, spent her life 14 centuries ago defending her people from outside invaders. Following the ascension of Maharaja Gulab Singh in 1822, the current Bave Wali Mata Mandir was rapidly established. It is also known as the Mahakali Temple, after Mata Vaishno Devi, who is said to have the second-highest level of mystical power. The Bahu Temple is dedicated to Goddess Kali, who is considered to be the most important deity in Jammu and Kashmir.

One of the most important shrines in the Jammu region is the Buddha Amarnath Temple, dedicated to the Hindu god Shiva. It is located in the Rajpura village in the Poonch district’s Tehsil Mandi. Before entering the stupa, pilgrims bathe in the River Pulsata, which flows from the shrine and is revered. The river was given Rishi Pulsata’s name because of a made-up narrative about his grandfather, Ravana.

Shiva Linga is a white marble sculpture that is not directly manufactured at this temple. The ancient cave shrine of Amarnathji in Kashmir is not older than the Buddha Amarnath temple. This ancient temple is well-known for its annual Raksha Bandhan Mela and Chari Mubarak Yatra, which draw many devotees from all over India.

One of Pahalgam’s oldest temples, Mamaleshwar Temple has a history that dates back to the 12th century. On the right bank of the River Lidder is a temple dedicated to Lord Shiva that was constructed by King Jayasimha. At 8800 feet above sea level, the temple is lofty.

This was known as Mamalishwara and was dedicated to Lord Shiva. According to legend, Lord Ganesh was appointed as a doorkeeper to prevent anyone from entering the temple without his consent. Thus, it was given the name Mam Mal – Don’t go. The temple is maintained by a priest. People from Pahalgam frequently visit the area in the summer.

Often regarded as the entrance to the Vaishno Devi shrine, the Chichi Mata Temple is a revered holy landmark. The shrine is situated in the Jammu and Kashmir province’s Samba region. According to legend, it is a required stop on the journey to Mata Vaishno Devi’s shrine and counts as a pehla darshan. If Chichi Mata is not visited, the Vaishno Mata Yatra is not complete. During the Navratra festival, a lot of worshippers swarm the temple.

In the Samba district of Jammu and Kashmir, India, the village of Purmandal (also known as Chhota Kashi) is situated on the Devika River. Hindus visit the area and its temples on pilgrimages because they have the belief that taking a river bath cleanses the soul.

The Shri Shiv Khori cave is located roughly 4 kilometres from Ransoo, the shrine’s base camp, which is located in the Reasi District. A 4 foot tall naturally formed “Shivji Maharaj Lingam” is the cave’s defining feature. The cave also contains other natural deities that are depicted on the stones. The 33 crore Hindu Pantheon gods are represented by these gods. Road distances from Jammu to Ransoo via Katra (Shri Mata Vaishno Devi) are 129 km, 112 km, and 57 km, respectively, as measured from the district headquarters in Reasi. Deputy Commissioner Udhampur (the former Distt. ), who presided over the Shri Shiv Khori Shrine Board when it was established in 2003, served as both its member secretary and chairman.

It is believed to be the oldest site in the Shivalik province and is located approximately 3.5 kilometres from the centre of Jammu city. This temple, which is conveniently accessible from many parts of the town, is located on the popular Circular Road.

A black Swayambhu Shiva Lingam is treasured in the temple, which honours Lord Shiva. The location is also known as Jamvant Cave since it is believed that Jamvant, who played a prominent role in the Ramayana, died at this location.

The sanctuary contains two conventional caverns, each with a depth of about 30 feet. From the ground level, visitors must ascend numerous marble stairs in order to access the Shiva Lingam. Every day of the year, a huge number of devotees enter the Peer Kho Cave Temple, and this number only rises on Hindu holidays such as Shivaratri.

One of the most revered sanctuaries, it is known for drawing a huge crowd of followers who continuously gallop around the premises in search of the serene beauty. This temple has a good history and was enhanced by Raja Ranbir Singh, a devotee of Lord Shiva. It goes together with a structure where Lord Shiva prayer days are observed. From 12 to 18 inches tall, these are performed.

A Goddess Durga shrine known as Machail Mata is the Machail Chandi Mata Temple. It is located in the village of Machail of Sub Division Paddar, from which it gets its name, in the Kishtwar District of the Jammu region in the Indian union territory of Jammu and Kashmir.

Hindu temple known as Kheer Bhawani, Ksheer Bhawani, or Ragnya Devi is located in the village of Tulmul in Ganderbal, 25 kilometres to the northeast of Srinagar, Jammu and Kashmir, India. It is built over a holy spring and is dedicated to the Hindu deity Kheer Bhavani.