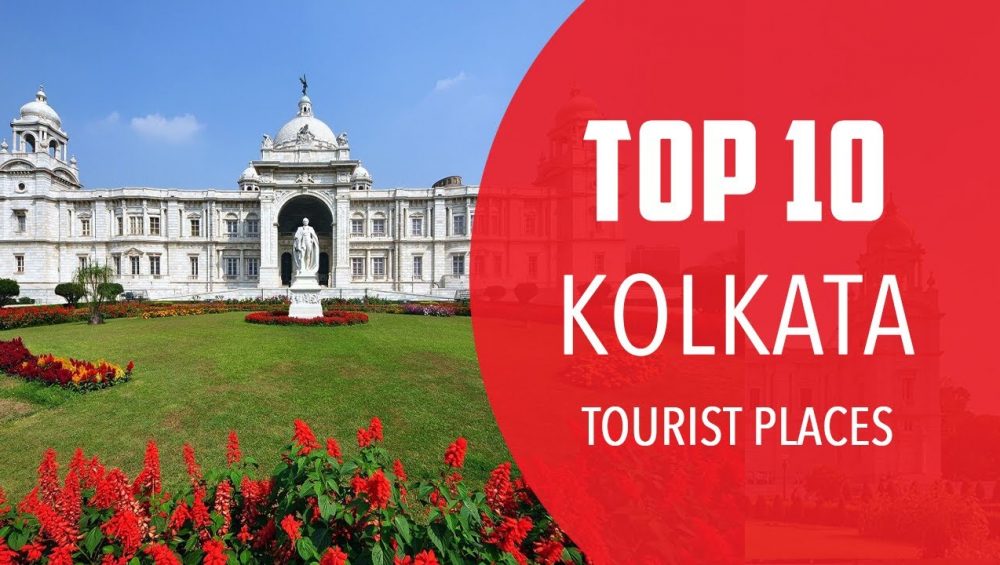 Kolkata is gifted with a large array of tourist attractions that provide each visitor with a distinctive experience. The City of Joy offers a wide variety of exciting attractions to keep tourists happy. There are number of Places to visit in Kolkata, including tranquil lakes, calming parks, historical structures, museums, and libraries. There are also numerous old churches and temples.

The commercial districts, theme parks, and delectable restaurants make sightseeing more fascinating. A trip to Kolkata is likely to fascinate every traveller with all of these and much more.

Here is a list of all the top places to visit in Kolkata India if you have any upcoming travel plans. Some locations, however iconic, are hidden from the city’s tourist crowd and nonetheless call for a visit.

When visiting Kolkata, one must not miss the Victoria Memorial. This memorial was built in Queen Victoria’s honour and unveiled to the public in 1921. It was created by William Emerson, a well-known architect of the time and the president of the British Institute of Architects at the time.

Unquestionably, this location is one of the best art museums in the nation, with an extensive collection of lithographs, historical documents, artefacts, and paintings depicting the royal British dynasties. It also displays an astonishing architecture, standing 184 feet tall and covering 64 acres of ground.

The Dakshineswar Kali Temple, which is dedicated to Devi Bhavatarini, a manifestation of Goddess Kali, draws throngs of worshippers each day. This temple, which is located on the banks of the River Hooghly, was constructed in 1847 by Rani Rashmoni, the Queen of Janbazar. This 25-acre temple is highly esteemed by Hindu devotees who come here to ask for the goddess’ blessings and find solutions to their troubles.

The history of the temple carries sociopolitical as well as spiritual significance. Regarding architecture, the temple was constructed in the conventional “nav-ratna” (nine spires) style that is related to the Bengal School of architecture. The construction of the structure cost an astounding INR 900,000 and took 8 years.

After Shri Ramakrishna Paramhansa succeeded his older brother as chief priest after his death, the temple gained notoriety among the faithful. Being a fervent follower of Goddess Kali, he significantly altered Bengal’s socioreligious climate.

The temple’s founder, Rani Rashmoni, played an equally significant role in building the temple’s prestige. She broke down the social barriers of class, caste, faith, and religion by opening the temple gates to every segment of the population, in contrast to outdated views.

Twelve identically sized Shiva temples with black stone shivalingas are located in the main temple’s expansive courtyard. The Shiva temples are built in the traditional Bengali architectural style known as “Aat- Chala,” and they depict the 12 Jyotirlingas (eight eaves). Shri Ramakrishna Paramhansa got enlightenment in one of the Shiva temples located here.

The Indian Museum in Kolkata, which opened its doors in 1814, is thought to be the nation’s first museum. Dr. Nathaniel Wallich, a botanist from Denmark, was the Asiatic Society of Bengal’s inaugural curator when the organisation was established in Kolkata. Public access was granted in 1878. This museum is the biggest in the nation, with approximately 60 galleries and six main departments. The museum takes pride in being the ninth-oldest in the world.

Here are on show a vast array of Mughal artwork, fossils, armour, mummies, skeletons, jewellery, and antiques. Visitors are enthralled by this museum’s stunning architecture in addition to its extensive collection. Italian architect Walter B. Grawille created the design.

The Kalighat Temple in Kolkata is regarded as one of the 51 Shakti Peeths’ most significant sites. Prior to that, there was a ghat along the River Hooghly’s former course, which also influenced the city’s name. The right foot toes of Goddess Sati’s burned body are said to have fallen off at Kalighat during Lord Shiva’s Rudra Tandava.

The Kalighat temple is mentioned in both 15th- and 17th-century literature. The first temple, which was a modest cottage, is thought to have been constructed in the first half of the 16th century. The temple’s current building, however, is only thought to be 200 years old.

Adi Ganga, a narrow canal that flows into the Hooghly River, is where the Kalighat temple is situated. Adi Ganga means “Original” in Sanskrit, and the term Adi Ganga refers to the canal’s route, which is thought to have been the Hooghly River’s original channel or path. Archer coins, which were common during the Gupta era, are evidence that the temple existed in the same place throughout that time.

Two small temples are located on the temple grounds; one is devoted to Shiva and is known as Nakuleshwar Mahadev Temple, while the other is devoted to Radha- Krishna and is known to the locals as Shyamo- Ray Temple. A few elevated platforms are available in the temple’s courtyard for performing specific tasks and for viewing the rites performed inside the sanctum sanctorum.

The fact that the city of Kolkata is named after the deity Kalika who rules over Kalighat is an intriguing fact linking the two places.

Mother Teresa established the Missionaries of Charity headquarters, also referred to as “Mother House,” in 1950 with the intention of helping people. Her tomb is situated exactly where she was last laid to rest.

Along with the tomb, visitors may also see the house where she lived the majority of her life. It is a significant location in Kolkata to see. A tiny museum that showcases Mother Teresa’s life and whatever basic amenities she managed to live with has also been constructed close to the building.

Among the museum’s artefacts and displays are Mother Teresa’s handwritten letters, her saree, her crucifix and rosary, her worn-out shoes, and a worn-out bowl. Her scribbled requests for spiritual guidance are also displayed here. They demonstrate the modesty with which she lived her life.

Visitors can pray and meditate in Mother Teresa’s burial place or in the room where her tomb is located. Sometimes, pilgrim group masses are held here with priests present; however, in order to fulfil such requests, advance notice is required.

Another well-known location in Kolkata to visit is Birla Mandir. Its stunning architecture, which features delicate carving and sculpture and was constructed 160 feet above the earth, creates a spellbinding sight. It is situated on 130 acres of land and is constructed of white marble. Its construction began in 1970 and was finished in 1996. The Birla Temple, also called Lakshmi Narayan Mandir, is devoted to Lord Krishna and Goddess Radha.

The temple also features statues of Shiva in meditation, Goddess Durga, and Goddess Shakti in addition to the main deities.

The temple, which was constructed by the prestigious Birla Family of West Bengal, is structurally similar to the Lingaraj Temple in Bhubaneswar, Odisha, and attracts a great deal of pilgrims during the Janmashtami celebrations.

Built with a blend of traditional and contemporary design features, it is regarded as one of the country’s finest architectural masterpieces, with fine and detailed artworks covering the dome, pillars, and walls of the temple. The marble walls are adorned with graphical sculptures of Bhagavad Gita lessons and passages. Architect Nomi Bose designed the complete structure.

The temple is located in South Kolkata on Ballygunge Road.

Science City in Kolkata, the largest science centre in the entire Indian subcontinent, is one of the key attractions and a must-see since it provides visitors with a one-of-a-kind experience. The Science City is an ideal location for experiencing the marriage of science and entertainment. It first opened its doors in 1997.

It is a division of the National Council of Science Museums (NCSM) and was founded with the sole purpose of popularising science. The Science City is spread across 50 acres of land that was once a dumping ground for more than a century. The facility is split into two sections: the Science Centre and the Convention Center.

The centre, which is popular with both local and international tourists, contains a part dedicated to aquatic worlds, which houses some of the most unique fish and insects. Space Odyssey, Dynamotion, Science Exploration Hall, Maritime Centre, Earth Exploration Hall, and a huge Science Park are all located in this region.

Eden Garden, India’s oldest cricket venue, is a must-see for cricket enthusiasts and has been called one of the world’s most iconic cricket stadiums. It is the site of various historical sporting events.

The Melbourne Cricket Ground in Australia is the largest cricket stadium in the world, but it is also the largest in India. The Kolkata Knight Riders and Bengal Ranji Teams both call it home. Former Australian captain Steve Waugh referred to the loudest and liveliest crowd as “The Lords of the Indian Subcontinent” at Eden Garden.

The little fact about Eden Garden is that it was originally called “Auckland Circus Gardens” before being renamed “Eden Gardens” in honour of Emily and Fanny Eden, the two sisters of Lord Auckland Eden.

The Nicco Amusement Park is the largest amusement park in Eastern India and is situated in the affluent Salt Lake City of Greater Kolkata. It is recommended to spend an entire day here at leisure, enjoying and having fun with family.

It has about 35 distinct attractions, including water rides, amusement rides like Toy Train, Tilt-a-Whirl, Striking Cars, Paddle Boat, Water Chute, Water Coaster, Flying Saucer, Pirate Ship, River Caves, Cyclone, and Moonraker. It was first made available to the public in the year 1991.

The Indo-American Hybrid Seeds Limited, a company that also runs the greenhouse, grows and sells a variety of plants in the greenhouse at Nicco Park, which is also a certified “green park.”

Nicco Corporation Limited and the West Bengali government work together to manage the park as a joint venture. Rajive Kaul, the Chairman of Nicco Group, had the idea for an amusement park while celebrating the 300th anniversary of Kolkata’s establishment.

Along with the entertaining rides and attractions, the park also offers educational amusement for children, which includes a number of educational displays inside the park’s boundaries and explanations of the scientific principles at the heart of each ride’s operation.

Additionally, a solar energy village has been constructed inside the park to help kids understand how unconventional energy sources can be used as substitutes for fossil fuels in an effort to conserve them.

Additionally, The Nicco Park has won various accolades on both a national and international scale. The enormous cyclone was named the greatest ride made in India in 2007 by the Indian Association of Amusement Parks and Industries, and its river caves were recognised as the most well-liked and inventive rides of 2010 by the same organisation.

Howrah Bridge, also known as Rabindra Setu, is regarded as the busiest bridge in the world and a great example of engineering from the 20th century. Howrah Bridge, which spans the Hooghly River in Kolkata, is a well-liked tourist destination. This bridge, which links Kolkata with Howrah, is around 705 metres long.

Without the use of nuts or bolts, it was constructed in 1874 on two pillars that stood 270 feet tall. The Hooghly River has two additional bridges, Vivekananda Setu and Vidyasagar Setu, at different locations.

Given that the bridge has seen many significant historical events, including both World Wars I and II, it is regarded as an emblem of Bengal’s history and culture. The third-longest cantilever bridge in the world at the time of construction, the bridge was hailed as an architectural marvel due to its classification as a “Suspension Type Balanced Cantilever” type structure.

Tata Steel was contracted to supply the majority of the high-tension steel needed for the bridge’s construction, and the entire undertaking cost INR 25 million.

With over 200 000 vehicles and 150 000 pedestrians using it each day, the bridge is now regarded as the busiest cantilever bridge in the world. Read Most visited Tourist Places in India by Domestic and Foreign Tourists