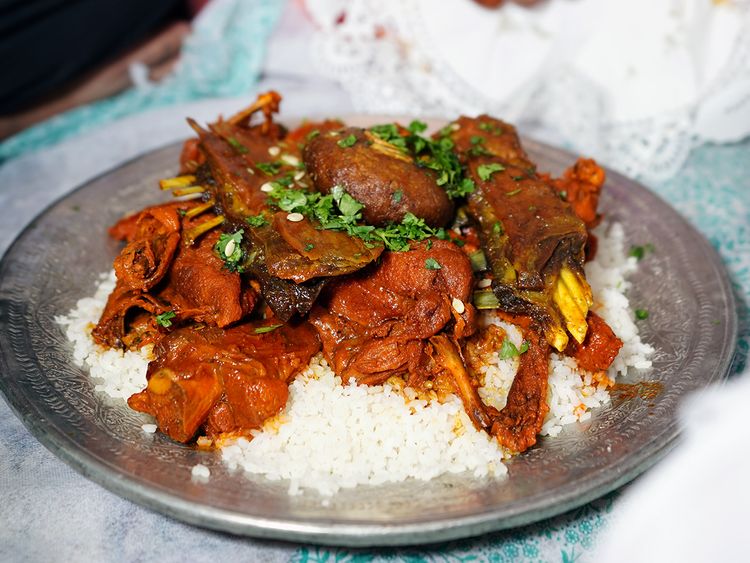 Wazwan is a multi-course feast that is a hallmark of Kashmiri cuisine and a source of great pride for the people of Kashmir. With a few vegetarian options, almost all of the recipes are meat-based and include lamb or chicken. It is well-liked all over Kashmir. Wazwan is additionally served at Kashmiri reunions and cuisine festivals abroad.

Waz and wan are words that translate to “shop” and “cook” respectively in Kashmiri. The royal wazwan is Kashmir’s supremely formal dinner. Between fifteen and thirty of its thirty-six dishes may be meat preparations, which are overnight-cooked under the guidance of a master chef known as a vaste waze. The dinner is served to guests from a huge copper dish known as the traem while they are sitting in groups of four.

The beginning of the meal is marked with the invocation of Allah for Kashmiri Muslims and Lord Shiva for Kashmiri Hindus, as well as ritual handwashing in a vessel known as the Tash-t-naer that is carried around by attendants.

The Gushtaba is a large meatball which signals the end of the main course. After that, desserts are served. In winters, the dessert can be a hot sweet dish and in summers, it is usually something cold.

Sabz Haakh – Spinach-like leafy greens cooked in mustard oil with chilly, without which Wazwan is incomplete.

Goshtaba – Meatballs with cheesecake-like texture minced with fat and dipped in mutton broth, with gravy based on curd, cardamom, dry ginger, and fennel.

Marchwangan Korma – Fiery hot Kashmiri chilly korma; three-quarters of the chilly used in the entire wazwan is singularly used in this dish!

Doon Chetin – Walnut chutney flavored with yogurt and Kashmiri chilies – a Kashmiri staple that will take your breath away, literally!

This tasty chicken-based specialty is made by splitting a full-chicken into two halves. The chickens are then cooked with ground cashew nut and poppy seed paste to give it a whitish look, and then garnished with coriander leaves.

Kashmiri Pulao – Basmati chawal cooked in milk and ghee with saffron and dry fruits and kishmish separately roasted in ghee.

Tabakh Maaz – Glossy ribs cooked in ghee then simmered in yogurt till dry.

This Kashmiri dish is a yogurt-based curry made mostly with chopped lotus stems. There is abundance of curd in the curry and the flavor is further enhanced with spices such as fennel seeds and cardamom. Lotus stems is also sometimes replaced with mutton meat.