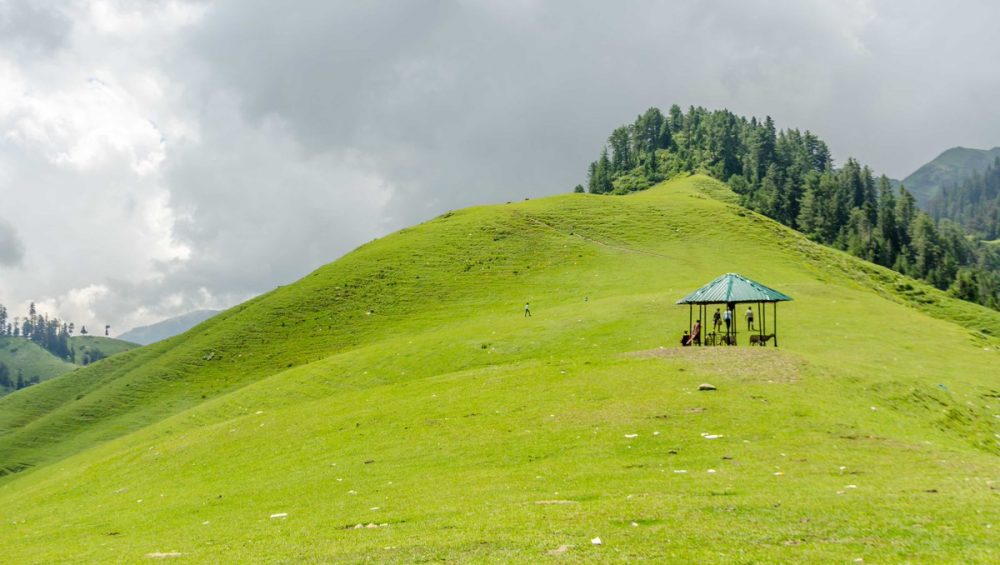 The road from Jammu to Bhaderwah snakes, slithers, and glides through some of India’s most breathtaking landscapes over 200 kilometres. In a flurry of ivy green, forested hillsides and dilapidated tuck stores rush past, while the quiet river, Neeru, glistens away into the distance. And then, after a dreadful five hours and forty or so minutes, the bowl-shaped valley of Bhaderwah is seen.

Sitting on the foothills of the middle Himalayas, the town sits at a lofty 5,295ft and has been monikered very aptly as Chhota Kashmir (mini Kashmir). The deodar forests are deep and shrouded in silence, and its meadows are swathed with fuchsia rhododendrons. There’s history, rife with both local legends and political fervour. But what will cause you to lose your heart in mere seconds to the once sleepy valley, is its snow-dusted mountains. Perpetually shimmering under the winter sun, they beckon travellers from across the world, making it near impossible to leave.

Additionally, Bhaderwah is a place of fairs and celebrations including the Sobar Dhar Mela, Mela Pat, Kud dance, and Pahari traditional melodies and music. A hundred-year-old mosque, an ancient Vasuki Nag Temple, and the Fort are some of its other heritage attractions.

March till November and snow fall happens in the month of November till February depends on ones choice.

How to reach Bhaderwah

The main hub to reach Bhadarwah is Jammu. Jammu is connected both by Air and Rail to all major Indian Metros. It is approximately 200 Kms form Jammu to Bhaderwah by road.

Route from Himachal to Bhaderwah

Chamba-Bhaderwah Road (90 Kms). It is a road that leads you past numerous breathtaking panoramic views of the unspoiled countryside. The 8th km of the Bhaderwah-Chamba road is where the 166 km long Bhaderwah-Bani-Basholi route starts.

Places to visit in Bhaderwah

Seoj Meadow: Seoj’s meadow is bordered on its western side by a raging river that rises from the hills that surround Kailash Kund. While there are extensive areas of meadows on the eastern side, the view across the river is an exact duplicate of Pahalgam’s splendour. The Ramnagar parts of the Udhampur district are reached via rolling meadows that descend across the Seoj rivulent’s crystal-clear water on the western side.

Chinta Valley: At a height of 6,500 feet, a lovely valley with the Chinta Nallah running through it and dense coniferous trees on all sides may be found. Picnickers like a grassy meadow named Bagan on one side of the hamlet.

Jai Valley: The beautiful Jai longitudinal valley, which is situated at a height of 7000 feet, is five kilometres from Chinta. A beautiful valley may be seen 35 kilometres from Bhaderwah. It is a 6 km2 area that is incredibly gorgeous. The valley is encircled by tall, steep-sloped deodar trees, and a lovely, expansive meadow is nearby.

Padri: At a height of 10,500 feet and 40 kilometres from the Bhaderwah-Chamba route, Padri is a “Gali” of undulating terrain. Heavy snowfall of up to 5 metres per day continues until mid-June. It is a well-known and popular picnic location in Bhaderwah. In addition to Satringal, Kahni Top, Bhal Padri, Nalthi- basti, Hanga, Noorie, Devchatar, and Kellar, there are more well-known locations nearby with access to the hilly terrain and beautiful beauty.

Khellani: A Deodar-covered plateau with a forest area overlooking the Kellar valley is 15 kilometres from Bhaderawh. An appropriate recreation area is one that is drained by the Bankut Nallah. The valley produces an abundance of fruits such apricots, peaches, plums, and apples from late summer through autumn. You can take the road back to Khellani after taking a stroll via the Khellani Pass through the many communities joined at Maulote.

At Bhaderwah, the weather is consistently chilly and pleasant. Summertime brings a small increase in temperature along with a warmer-than-average atmosphere. By the end of December, the city is entirely covered in snow after the temperature starts to decrease in September. April through July would be the ideal season to visit the city if you are very tolerant of cold weather. If all else fails, the best time to visit the city to experience the snowfall is from October to February.

During summers, the temperatures rise a bit, and the atmosphere is slightly on the warmer side. From September, the temperature begins to drop, and the city is completely covered with snow by the end of December. For people who are very receptive to cold climate, April – July would be the best time to visit the city.

How to Reach Bhaderwah

By Road: An all-weather road with numerous steep inclines and hairpin curves connects Jammu to Bhaderwah. The route can be broken down into four sections: 64 km from Jammu to Udhampur on NH 1A, 55 km from Udhampur to Batote on NH 1A, 48.5 km from Batote to Pul Doda on NH 1B, and 29 km from Pul Doda to Bhaderwah. From Jammu and Udhampur, buses run by J&K SRTC and private tour operators travel to Bhaderwah. From Jammu to Bhaderwah, the trip lasts about 7 hours, whereas Udhampur takes 5 to 6 hours. Tata Sumo and share taxi services are also offered. Along the path, there are many tourist attractions like Patnitop and Batote.

By Train: Jammu Tawi is Bhaderwah’s primary railhead (206 km). Nearly all of India’s main cities are connected to Jammu Tawi. Another rail hub to Bhaderwah is Udhampur (120 km), where a few trains run between Delhi, Ahmadabad, and Allahabad.

By Air: Bhaderwah’s closest airport is in Jammu. Airlines including Air India, Spicejet, GoAir, and Jet Lite offer direct flights to Jammu Airport from Delhi, Jaipur, Leh, and Srinagar. From the Jammu Airport, one may go to Bhaderwah via direct bus or by private taxi.

Holidays Hunt Travel, one of the best tour and travel agency in Jammu and Kashmir, provides Bhaderwah tours. For a customised Bhaderwah tours contact us. Please call or whatsapp +91-94199-15255 or visit our website holidayshunt.com

Here is an informative Kashmir travel guide. Learn about the tourist attractions, things to do, where to stay when holidaying in Kashmir. Read More

What about Bhaderwah is famous?

The chilly weather and breathtaking scenery are what attract tourists to Bhaderwah. The benefits of trekking are added.

Who should travel to Bhaderwah?

For all those looking for adventure, it is the finest location. The location would also be quite appealing to those who love the outdoors.

What is the best time to visit Bhaderwah?

At Bhaderwah, the weather is chilly and nice all year round. The temperature rises a little in the summer, and the air is a little warmer. The city is totally covered in snow by the end of December after temperatures start to decrease in September. The best months to visit the city for those who are sensitive to frigid temperatures are April through July. Otherwise, the city can be visited between October and February, when snowfall can be fully appreciated.

During summers, the temperatures rise a bit, and the atmosphere is slightly on the warmer side. From September, the temperature begins to drop, and the city is completely covered with snow by the end of December. For people who are very receptive to cold climate, April – July would be the best time to visit the city.